Malta and the amp music festival

Sooooooo…. I’d booked to go to the AMP Lost and found Festival being held in Malta last weekend… I’d never been to Malta before or that particular festival and was really looking forward to both experiences! 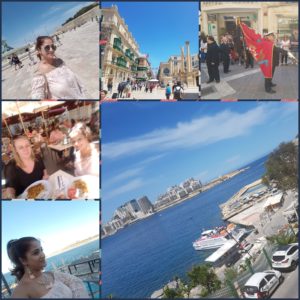 This was not a solo trip and one of my besties came along too. We’d pre-booked both the hotel and the flights a year ago. We flew with Air Malta from Heathrow and stayed at a beach front hotel in Qawra. (I won’t mention actual name as I really was not impressed all round, but it did have Qawra in the name!)

Anyway, return transfers again had been booked through www.hoppa.com, who once again gave great service at only £34 return from the airport to Qawra in a private taxi for both of us, which took about 40mins to get to the hotel!

Well, it was a tad surprising and disappointing, but it was all grey and cloudy when we arrived! Apparently it had been raining just before the plane landed and I thought I was leaving the rain behind!

Check in went ok, the apparent 4 star hotel turned out to be more 3 star basic but at least we were given a beach front facing room with a view.

We freshened up and decided to go collect our festival wristbands and bus pass wristbands from Malta’s very own Café del Mar, which was the unofficial hub of AMP  www.lostandfoundfestival.com, this was only about a 10min walk from where we were staying.

We ended up queuing up along with about a hundred highly excited mainly teenage youngsters, which resulted in us  beginning to feel slightly concerned as we’d heard that this particular festival was more for an older age group, late 20’s upwards, hence why we’d booked!

This was also where the daily pool parties were being held, and was also the meeting point for the shuttle buses, which drove us around the rocky island for all the festival activities, boat trips and castle raves, which were planned for the afternoons as well as getting to the festival’s four main stages at night.

After the wristbands were on, we walked into Cafe Del Mar to check out the “Pool Party” and atmosphere. Hmmmmmmmmm… this was not looking up. Again the place was full of really young groups, possibly let loose on their own for the first time ever, and were showing it!

The line-up scheduled was diverse, and included old favourites (The Black Madonna, Heidi, Kölsch) alongside a few festival first-timers (Jamie xx, Diplo, Midland) with the vast majority of DJs cropping up more than once across the weekend — as well as emerging from behind the decks to disappear into hordes on the dance floor!

We didn’t stop for a drink and decided we were going to go sight seeing instead and also check out an alternative nightlife venue, just in case! Taking a taxi into St. Julian’s, which took about 25 mins and cost 20 Euro from St. Pauls / Qawra, we stopped for a lovely local lunch, and from there we walked into Paceville, which is where the main nightlife is situated in Malta, and where indeed we did find quite a lively atmosphere so ended up trying out a few of the busier bars before heading back later on to our hotel to get ready for the festival opening party at Cafe Del Mar.

We headed out around 11.30pm and walked up to the party. We stayed for around an hour as once again, it was a much younger crowd, so decided to head back to Paceville for the evening where we ended up having a great night!

Next morning after breakfast and as we hadn’t booked any boat party tickets with the festival ticket (As they’re extra, as was the castle rave.) We decided to do some sight seeing, so booked ourselves onto a day tour for 22 Euros to go by ferry, to the lovely islands of Gozo and Comino and which also included the opportunity to go to The Blue lagoon!

I for one DO NOT have sea legs at the best of times, but OMG, that was one rocky crossing for me and a few other girls onboard!

After having emptied out the whole of my stomach contents when we finally arrived in Gozo, we were given an hour and a half to wander around before getting the ferry on to Comino (which I personally was really dreading, the ferry journey, not Comino!) However, we were able to sit down and have a small lunch before having a quick mooch around with some souvenir shopping around the quaint little alleys in Gozo. It is rather lovely and bonus that the weather was great that day too! 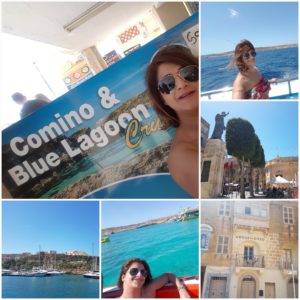 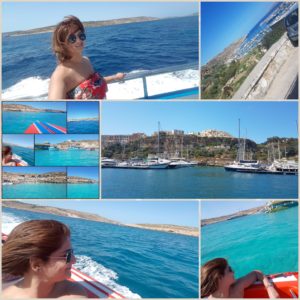 When we arrived in Comino we were given the option of taking a speedboat to see the 12 caves, which cost 10 euros each and that suddenly became “The Party” speedboat!!

He was whizzing that speedboat around at all angles, music blasting loudly and we were all hanging on for dear life. It was a rather adrenaline filled ride, not recommended if you suffer from sea sickness or indeed can’t swim as we weren’t given life jackets to wear!

The caves were lovely, Comino was very natural and unspoilt and The blue lagoon absolutely stunning!  Definitely recommend doing this whole day-trip !!

When we finally got back, we went for a lovely dinner before getting ready to go out for the first night at the actual festival, again we left around 11.45pm and took the shuttle service that was laid on for the festival goers (wristband cost £45 for that privilege!)

The festival was actually being held at Numero Uno, a large open-air club tucked away in Ta’ Qali, where the festival’s four stages were housed.

As a festival site, it wasn’t what we were expecting, pretty small, maximum 4000 people, but with their own lighting and individually themed  stages, the whole venue was easy to get around and about from.

It was a great evening and yes I actually spotted, well more like rumbled Annie Mac walking amongst the festival goers. Of course I had to ask for a selfie before she was whisked away! 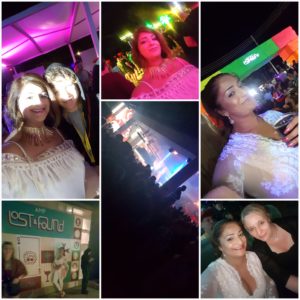 The next morning we headed out and decided to take a coach trip into Valletta the capital city of Malta. The bus journey took about an hour and cost 1.5 euros each way! Worth doing if you get the chance. 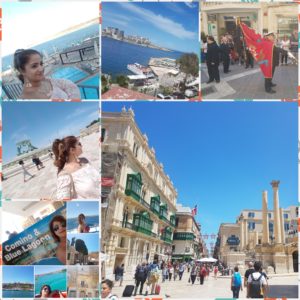 We walked all the way around, it doesn’t take long following the wall built around the city and yes its lovely; a very quiet place, quite steep in parts. We were gutted that the Jewellery shop street, which we’d been hunting was virtually all closed up observing half day opening traditions, unfortunately for us, we finally only discovered it after 1pm, so just beware. However, it was probably best as there is far too much choice in Filligree silver jewellery everywhere and yes one treated one’s self to a beautiful leaf pendant with rose gold accents!

After we finished in Valletta, we headed back to the hotel, and then got ready, and had something to eat, before heading off once again to get the shuttles to the festival site.

Another great night and Annie Mac was playing her particular set that night as well!

With regards to would I go back to this particular festival again?

Well, the weather is ideal, low twenties throughout much of the day before growing cooler at night and local prices are definitely lower compared to festivals back home and everyone speaks english! If I were in my teens and 20’s, then yes I would enjoy going back. But as it was, although we had a great time, we haven’t rebooked for next year as we do prefer the older crowd around us.

Next trip is Amsterdam in a week.

About the Author: Aalia